iPhone is celebrating its 10th anniversary today. It’s hard to believe an entire decade has passed since the first iPhone went on sale. 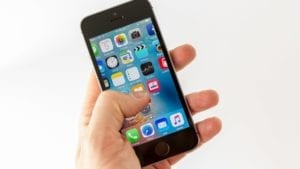 What did we do before we could ask our mobile phone any question and it would give us an answer? How many devices did we have to carry to be able to shoot videos, take pictures, make notes, get directions and listen to music before the iPhone and other smartphones?

It’s almost painful to think about the first mobile phones. Some of you will remember carrying around a “bag phone” in your car and putting on a magnetic antenna. Then came huge mobile phones, flip phones, BlackBerry, and a myriad of other cellular devices.

The launch of the iPhone caused a wave across the industry, setting new standards and prompting greater expectations from consumers.

Consumers wanted quick and easy ways to make their lives easier. They wanted their phones to be intuitive and provide a wide range of functions with just a touch of a button.

The iPhone was a “must-have” for so many consumers. It was the envy of many other cell phone makers. Consumers wanted it even though it didn’t use the latest wireless technology and ran on slower networks than some other products available.

The iPhone continues to be an industry leader today and it has led to the advancement of other technology. It has changed the way we interact with digital content.

Websites had to become mobile. It was a nightmare, especially in the beginning when you tried to look at a desktop website on a 3.5-inch display. If it had video, it could be hours before it loaded.

Mobility went even further with the development of apps. There are now about 2.2 million apps available in Apple’s app store.

We have come a long way since the iPhone hit the market but have you and your business come along with it or are you still a decade behind? How does your website function on mobile devices? Do you have an app?

If not, you are already behind the curve. It’s going to be harder and harder to catch up with market and industry leaders as the advancements in technology grow over the next decade.

You may not know where to start and you may think it’s beyond your budget. However, it can be quicker and easier than you think. We can help you set priorities and reach your goals.

We use cookies on our website to give you the most relevant experience by remembering your preferences and repeat visits. By clicking “Accept All”, you consent to the use of ALL the cookies. However, you may visit "Cookie Settings" to provide a controlled consent.
Cookie SettingsAccept All
Manage consent

This website uses cookies to improve your experience while you navigate through the website. Out of these, the cookies that are categorized as necessary are stored on your browser as they are essential for the working of basic functionalities of the website. We also use third-party cookies that help us analyze and understand how you use this website. These cookies will be stored in your browser only with your consent. You also have the option to opt-out of these cookies. But opting out of some of these cookies may affect your browsing experience.
Necessary Always Enabled
Necessary cookies are absolutely essential for the website to function properly. These cookies ensure basic functionalities and security features of the website, anonymously.
Functional
Functional cookies help to perform certain functionalities like sharing the content of the website on social media platforms, collect feedbacks, and other third-party features.
Performance
Performance cookies are used to understand and analyze the key performance indexes of the website which helps in delivering a better user experience for the visitors.
Analytics
Analytical cookies are used to understand how visitors interact with the website. These cookies help provide information on metrics the number of visitors, bounce rate, traffic source, etc.
Advertisement
Advertisement cookies are used to provide visitors with relevant ads and marketing campaigns. These cookies track visitors across websites and collect information to provide customized ads.
Others
Other uncategorized cookies are those that are being analyzed and have not been classified into a category as yet.
SAVE & ACCEPT
Scroll to Top